I first saw a technique for “sun” drying zucchini in an oven in my beloved Prune cookbook. Their technique uses the oven with just the pilot light to achieve a texture similar to that of Sicilian sun-dried zucchini, but since my home oven does not have a pilot light, I had to improvise. Most recipes I found online were for dehydrators, but again, I don’t have one.

I tried it first with my toaster oven, which worked well but was severely limited on space. So I played around with my technique using the oven and it worked pretty well. I’ve never had the real, sun-dried version found in Sicily (on my bucket list, sigh), but this seems pretty close. And it crisps up quickly when sautéed in hot olive oil, which is the Fried Zucchini in Agrodolce with Chilies and Mint recipe I wanted to try when I first made this.

Heat oven to 175 F (or heat a toaster oven to 150 F). If your appliances have the ability, you can even go as low as 120 F. My oven only goes to 175 F, so that’s what I used. The higher the temperature, the more it cooks vs dries out the zucchini, but if you don’t have a dehydrator, this is the next best method.

Trim the ends off the zucchini and slice the zucchini into 1/8th inch slices: slice either lengthwise into long strips or crosswise into medallions. Use either a sharp knife or a mandolin, but try not to cut thicker than 1/8th inch or they can become rather chewy.

Place the zucchini slices onto the salted paper towels, pressing each piece into the towel so it absorbs the salt. Now lightly salt the tops of all the zucchini. 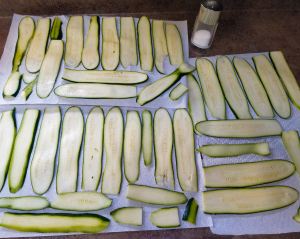 Next, cover the salted zucchini with another layer of paper towels and place something on top to lend just enough weight so the paper towels come in good contact with the zucchini. I used cutting boards, loading them with salted zucchini and stacking them on top of each other with a cast iron weight on top.

This is my quick and easy way of salting both sides of the zucchini without having to flip over every single piece.

Allow the salted zucchini to rest on the (salted) paper towels for about an hour. The salt will draw out some of the moisture, giving the dehydration and drying a jump start.

After an hour or so, peel off the top layers of paper towels and blot the zucchini with dry paper towels if still damp. 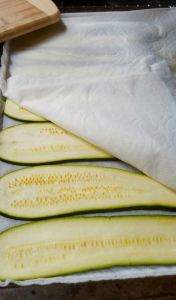 Place the dried pieces onto a baking rack placed in a sheet pan. Optional: lightly oil the rack or spray with cooking spray first to keep zucchini from sticking. 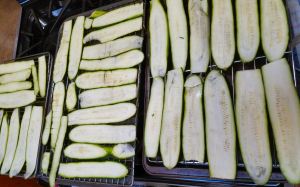 Place the pans into the oven and “bake” for one hour. After an hour, the pieces will have shrunk quite a bit. If they still feel damp, blot them, turn each piece and blot again (sometimes the air doesn’t circulate as well on the bottom side, so they need a quick flip), and put them back in for another 30 to 60 minutes.

Depending on how dry you want them, and depending on what temperature oven you’re using, you may need to keep them in even longer. I found that one hour on each side gave me a reasonably dry texture that later fried up nicely. You’ll want a texture like dried apples, leather, even fruit roll-ups: something soft and pliable yet not damp.

Allow to cool on racks before storing. I store mine loosely in a resealable plastic bag or in a container. Enjoy!