Let’s face it, things don’t always go as planned, especially when I’m in the kitchen. Here’s your opportunity to learn from my mistakes!

1) When making my French dressing, in the step where you shake to mix the vinegar and spices, make sure the lid is on tight! 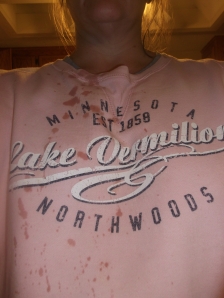 2) When making just about anything with onions (here I was making Pollo Al Chilindrón), be careful when adding them to a very hot pot. They will splatter, and your quick reflexes cause you to jerk your arm back before the onions are fully unloaded. And unfortunately, the three-second rule does not apply to this many onions. 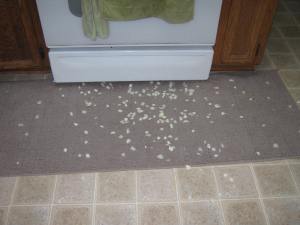 3) Thawing frozen sticks of butter (in this case, for my banana bread) on your patio table in direct sunlight may seem like a good idea, but not when the temperature outside is in the 90s and you totally forget about them. 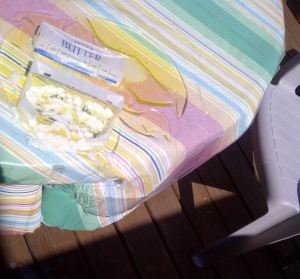 4) Be very, very careful with sharp kitchen knives. Taking time to drive to Urgent Care to wait for stitches significantly delays the meal. 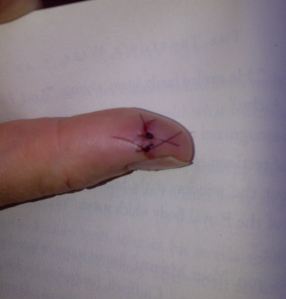 5) When making Scotch Eggs, be sure to leave LOTS of room in the pot for the hot oil to bubble up when you add the eggs, or it will boil over. I’m lucky all this oil didn’t start on fire — look closely and you’ll see it all over the stovetop, dripping down the pot, and pooled in the tray underneath the burner. 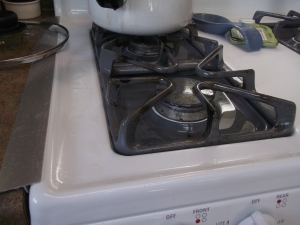 6) Be careful when grilling pizza – it can scorch really quickly. If you’re lucky, you can simply fillet the burnt crust off. 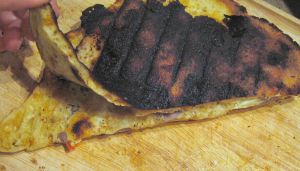 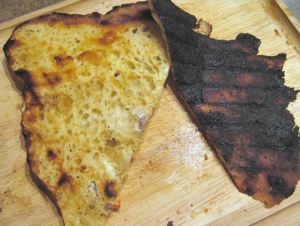 7) I’m still working on making popovers (Yorkshire puddings) in a pan. For now, I’ll stick to making them in muffin tins. 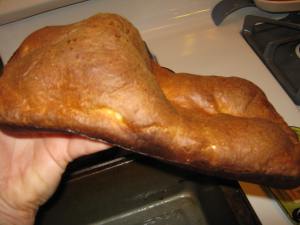 8) I was never very artistic, and rarely ever colored inside the lines. Apparently I can’t even draw the lines very well, either, even when tracing around the outside of a pan. 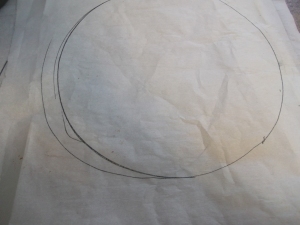 9) Pay attention when measuring! I read my recipe wrong and used more than double the amount of cocoa for my Olive Oil Dark Chocolate Cake.  I only figured it out when no amount of stirring this mixture didn’t make it smooth and silky like it was supposed to be. 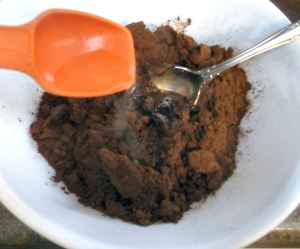 10) When placing the cheese-laden French Onion soup crocks in the oven, dropping the pan and spilling the soup all over the inside the oven is NOT a good idea. 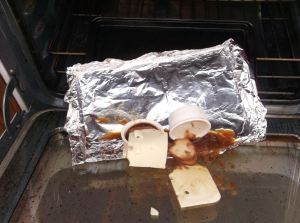 11) Make absolutely SURE that you know how to use the pectin when making jellies and jams. I used a new brand, assuming that all pectin was the same, and it clotted horribly. No amount of heat would dissolve it, and it made a really sticky, icky, gooey mess of my lilac jelly! 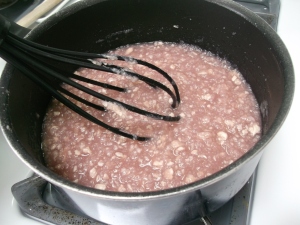 I ended up straining it, which left me with a very globby, sticky strainer. Ick. 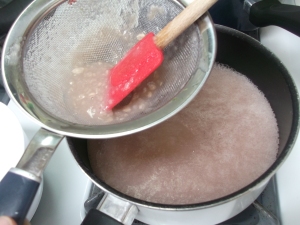 12) I took a cooking class, and while the instructor was prepping before the class, she sliced her finger pretty badly. They bandaged her up, so she continued the class with one finger wrapped heavily in gauze. Little did I know that when I went home to recreate the recipe, I’d do the Exact. Same. Thing. 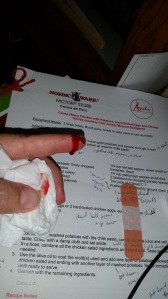 13) Don’t put a lid on the pot when making ghee. Or at least don’t leave the kitchen if you do. I set a lid on the pot and it boiled over and made a mess of my stovetop. It was easier to clean once it solidified, but what a waste of yummy ghee! 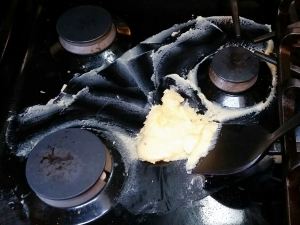