I first saw this recipe on the Facebook page of one of my favorite cooking magazines, Fine Cooking. I made this soup the same day I first saw it and it instantly became one of our favorites. As soon as fresh corn comes into season, I make it again and again, even freezing leftovers for a warm splash of summer during the cold winter months.

Position an oven rack about 4 inches below the broiler and heat the broiler on high. Arrange the prosciutto in a single layer on a small baking sheet and broil until it begins to crisp, 1 to 2 minutes. Flip the prosciutto and broil until it appears dry-crisp and has curled a bit, about 1 minute. Let cool, then finely chop or crumble by hand; set aside.

Slice the kernels off the corn cobs for a total of about 3 cups corn. Reserve the cobs.

In a medium (3½ or 4 quart) Dutch oven, melt the butter over medium heat. Add the onion and cook until softened and slightly golden, 5 to 7 minutes. Add the water, broth, potatoes, corn cobs, half (1½ C) of the corn, and 2 teaspoons of salt. Bring to a boil and then reduce the heat to medium low and simmer until the potatoes are tender, 10 to 15 minutes. Remove from the heat and discard the cobs.

Puree the soup until smooth, either in a blender or with an immersion blender. Add the remaining half (1½ C) of the corn and bring to a boil over medium-high heat. Reduce heat to medium low and simmer, stirring occasionally, until the corn kernels are tender, 3 to 5 minutes. Season to taste with salt and pepper. Garnish each serving with the crisped prosciutto, tarragon, and basil.

About the only ingredient for this soup that you can’t find at a farmers’ market, at least any that I go to, is the prosciutto. I get mine at either Trader Joe’s or the deli counter at any of our local upscale grocery stores. If you can’t find it at all, you can use regular bacon in a pinch, but it’s really so much better with prosciutto.

The first step is to make it crispy: either broil it in the oven, a toaster oven, or you can even fry it in a pan like bacon. I use my toaster oven for this step, placing the prosciutto on a rack over the broiling tray.

Broil it until it starts to crisp, then flip it until fully crisp. 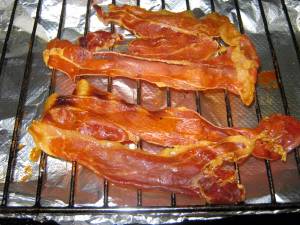 Remove from the heat and let it cool while you make the soup.

Start by slicing the kernels off the corn cobs. I love this little Oxo gadget for this step, especially since my kitchen knives and my fingers haven’t been getting along very well lately. 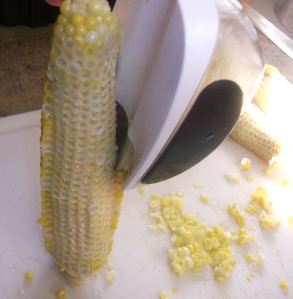 You should end up with about 3 cups of corn, but don’t worry if you have a little more or a little less. Remember to keep those cobs!

Next, peel and dice the onions and potatoes. The original recipe calls for red potatoes, but if you only have regular Russet potatoes, those work fine too. You’ll want roughly the same amount of diced onion and diced potato. 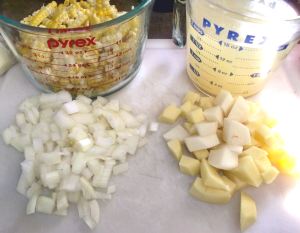 In a Dutch oven over medium heat, melt the butter. The original recipe calls for 4 T, but I don’t think you really need that much. If you love butter, use it all. If you’re cutting calories, use only half. Once the butter has melted, add the onion and cook until softened and slightly golden, 5 to 7 minutes.

While the onions cook, get your broth and the remaining ingredients ready to go. Remember, you will only use half of the corn now. You’ll add the rest in at the end.

Once the onions are softened, add the water, broth, potatoes, corn cobs, half (only 1½ C) of the corn, and 2 teaspoons of salt. Bring to a boil and then reduce the heat to medium low.

Simmer until the potatoes are tender, 10 to 15 minutes, or if you have other things to do around the house, you can let it go up to 30 minutes. But…before you go do those things, now is a great time to crumble the prosciutto. Just press down on the crisped pieces with a knife and they should crumble nicely. If not, just roughly chop it. 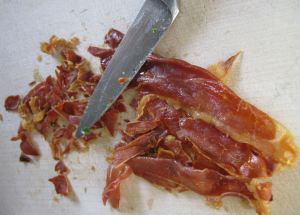 When the potatoes are soft, remove the soup from the heat and discard the cobs. Now it’s time to puree the soup to make it nice and smooth. To spare myself more cleaning up, I use an immersion blender. 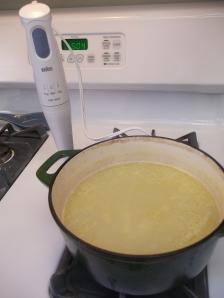 You could also ladle the hot soup into a blender, puree it in there and then pour it back into the pot, but then you have more opportunity to spill it, and another thing to clean up later. If you have an immersion blender, use it carefully, as the hot soup can splatter! 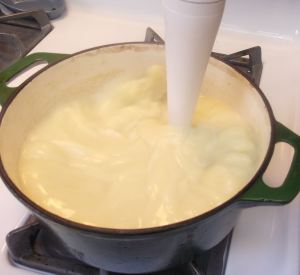 Add the remaining half (1½ C) of the corn to the soup. Pour it at a normal speed, not at the lightning-fast pace that my action shot below implies.

Bring to a boil over medium-high heat, then reduce heat to medium low and simmer, stirring occasionally, until the corn kernels are tender, 3 to 5 minutes. Season to taste with salt and pepper. Ladle the hot soup into serving bowls and garnish each serving with the crisped prosciutto, tarragon, and basil.

This is a great soup on its own with a crusty bread, or as a meal with a crisp white wine and a salad, like the  lox and avocado salad pictured here. And a geranium pot, of course. Enjoy!

P.S. Freeze any leftovers (or just make a batch of the soup strictly for freezing) by ladling into muffin tins and placing in the freezer. Once frozen, remove the “soup muffins” from the tin and store them in a freezer bag. Thaw 2-3 of them per person for a starter-sized serving.